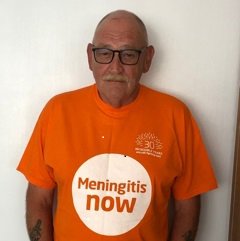 The Community Ambassador role, to me, is a way to provide an informed view of meningitis and its signs and symptoms

Within five hours she was on a life-support machine in West Middlesex Hospital. She died seven days later of pneumococcal meningoencephalitis, having never regained consciousness.

Meningitis was never a worry for us. She was 23 years old, she had been through university, where she trained and qualified as a midwife. Through school and university we made sure she had all her vaccinations and, as far as we were concerned, she was covered against all possible illnesses. Additionally, prior to her midwifery training commencing, she also received all those vaccinations advised by NHS Occupational Health. We knew nothing about meningitis, it was, as far as we were concerned, a childhood or adolescent disease.

Sometime after losing Katherine I was asked by Meningitis Now to talk to 250 students at a midwifery training day at the university Katherine attended. It was unbelievable that less than a third of the students had, or knew if they had, received the MenAWCY vaccination. Since then I have given a number of talks to various groups with a similar response to awareness of the disease and available vaccinations.

The Community Ambassador role, to me, is a way to work with the local community, schools and universities to provide an informed view of meningitis and its signs and symptoms, raise awareness of the available vaccinations, distribute literature and promote the invaluable work of Meningitis Now in funding research and supporting individuals and families dealing with the loss of loved ones and those suffering after-effects and recovering from this devastating disease.