Amazingly, he kept a positive attitude but then sadly lost his health battle to cancer the following year. Anita, from Ripon in North Yorkshire, tells the story of her much-loved Dad here as part of our Adults Get It Too campaign.

“The week before Dad became ill, he was the healthiest, fittest 74-year-old man we knew.

“On the day that he became ill he had complained of feeling a bit ‘flu-ey’ and by the afternoon he had started with some awful rigors. Mum called the doctor and they gave her a phone appointment, saying it was probably gastroenteritis and he should drink plenty of fluids.

“The next morning, Dad was worse again and, without Mum contacting the doctors, he did turn up to see Dad. Unfortunately, he didn't take his temperature or check his pulse and, again, suggested gastroenteritis. He prescribed some ibuprofen gel for Dad's aching arms and legs.

“By the third day Dad had started talking nonsense and wasn't recognising where he was or who we were. Mum called the doctors and explained this further change and we were told to ring 999 instantly. I rang 999 and went through the whole, dire, computer question rigmarole... the computer diagnosed that Dad wasn't an emergency case and they would send a taxi ambulance when one was free.

“Three hours later the ambulance arrived and it was suggested that the doctor only said to call 999 as it was 5.30pm on a Friday (I thought this was rather an odd thing to say and was beginning to think we were wasting their time). Within 10 minutes of being with Dad, the ambulance man told us that this was a severe emergency case and they were blue lighting Dad to Harrogate Hospital.

“Once at the hospital, Dad was very quickly moved into a rather serious side room. Mum and I had no idea what was going on except we kept seeing ‘sepsis’ written on his notes. We had never heard of sepsis, but it was clear that Dad was very unwell.

“Before long, Dad seemed to be becoming more and more unresponsive to medication and the poor, lone nurse seemed to be getting more and more on edge. We were asked to leave the room and wait in the family room. After what seemed an eternity the consultant anaesthetist returned. We were simply not ready for what he told us and I'll never forget those words – "We have taken Barry to the ICU. He is currently the poorliest person in this hospital and there is no scope for him to get worse".

In an induced coma

“The next time I saw Dad he was in an induced coma, wires coming out of his arms and legs and surrounded by life support machines. It was simply the most horrific sight. Mum and I spent the night in the hospital awaiting the worst news – we thought he was going to die.

“He made it through the night, but we still didn't know what was the matter with him except it was ‘sepsis’. Thirteen hours passed and, thankfully, he was hanging in there and they had removed some machines, as the majority of his internal organs were so fit and healthy he didn't need the support.

“It was during the afternoon that the blood results came back and we found out that Dad had meningococcal septicaemia – the worst form of meningitis and quite unusual in an older person.

“During the next few weeks, Dad had dialysis three times, CAT and MRI scans and his legs and arms were black from the septicaemia. The brain scans showed that, thankfully, his brain hadn't been damaged, but it was looking more likely that he would lose some, if not all his fingers and toes. Sure enough, the black receded a little but the fingers of his left hand never recovered – they had to be amputated later and his toes would ‘self amputate’ over time.

Thirteen weeks to wake up

“It took 13 weeks for Dad to wake up from his induced coma – I started to think he never would wake up.

“His life had changed irreparably, and so had ours. We had lost the once fit and healthy man who was going to live forever, to a dreadful disease that left him with the following disabilities - deaf in both ears, limited vision, tracheotomy, peg fed, amputated left hand fingers, self-amputating toes and complete paralysis from the waist down. It was his worst nightmare. 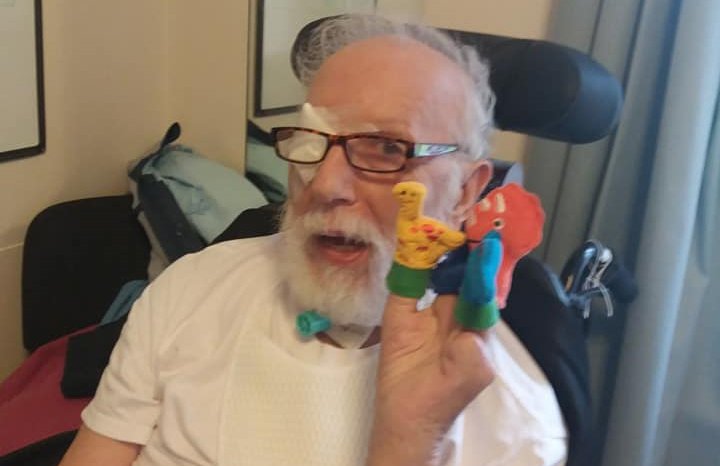 “Dad remained in ICU for four months and was eventually transferred to a neurological rehabilitation hospital. By this time he was fully awake and, rather amazingly, had come to terms with the "meninga‘bastard’itis" (as he called it). He was always the funniest, most sociable person and everyone loved him – he cracked jokes, chatted away to people (albeit we had to write it on a white board), kept up with current affairs and basically had a positive attitude towards everything – even asking for finger puppets for his stubby amputated fingers!

“He made such a good recovery that we had started with house renovations at Mum's as he was going to come home – we couldn't believe that he had survived such a horrific ordeal and come through still smiling and laughing. He never blamed anyone for what had happened, he was simply unique and wonderful.

“Unfortunately, after a series of urine infections and returns to hospital for brief treatments, on 14 July 2018 he peacefully passed away, in York Hospital. He had beaten meningitis but ureteric cancer beat him in the end.

“We'll never get over what happened to Dad and he has left a massive, gaping hole in all our lives.

We have been left without a person we loved so much. Dad won't see his beautiful grandchildren get married, he won't get to grow old with the woman he had been married to for 50 years. It has left a gaping hole that can never be filled and he is missed so much every single day.

“To this day we don't know why or how Dad became ill. We had 12 consultants dealing with him during his time in hospital and not one of them could give us an answer. What we do know is that we will never, ever ignore those signs that were missed at the beginning of this awful journey if, God forbid, we ever have to deal with it again.”