What followed next in August last year was a terrifying battle for Harrison’s survival. Ellamae, from Derby, told us the dramatic tale.

“It was Friday 23 August 2019, our parents Tonya and Stephen were were in the middle of their summer holiday. Mum had previously asked me to go to a relative’s funeral that they were unable to make due to being away - fortunately I managed to get the day off from my work.

“I was picked up by my nan and grandad around 8:30am to drive to Bramcote Crematorium for my great great uncle’s funeral.

“After a couple of hours there, I was dropped back home. I Facetimed my mum to tell her how we went, we must've been on the phone for around 20 minutes or so (the called ended as I needed the toilet). Little did I know that that was the moment where the journey to hell and back would begin.

“It is a true blessing that, even when locked, you can open our bathroom door from the outside... And there he was, my brother Harrison, collapsed on the bathroom floor, semi-conscious and semi-dressed. I immediately messaged Mum to say Harrison was sick, followed by a call to 111 to describe the symptoms as I was completely in the dark about any meningitis symptoms. He had patches of lilac coloured rash on his face, arms and body.

“I was shouting his name, asking how long he had been there for and all he kept asking was for water. When he looked up at me his pupils were so dilated. I managed to help him off the floor and get into his bed whilst on the phone to 111. I told them about the rash and they then asked whether he was sensitive to any light, if he had a temperature, if he could move his chin to his chest - all of which were impossible to test as he was semi-conscious. The 111 operator said that I should expect a call within 30 minutes. Within one minute, the operator called back to say an ambulance was on the way, and it arrived within four minutes.

“Three paramedics arrived and immediately began working on Harrison, which took around 45 minutes before they could then move him into the ambulance and to the hospital. I was told by one paramedic that what they were treating him for was meningococcal septicaemia. Their fast assessment of Harrison's condition, immediate treatment on the spot and amazing skills were a vital contributor to his survival.

“I rang my mum and she was beside herself. She managed to get hold of my nan who was at my auntie’s and they drove round straight away so I wasn't alone.

“Harrison was admitted to Royal Derby Hospital around 1:30pm. He was rushed through to A&E as myself, my auntie and my nan waited in a private room. The A&E consultant asked if Harrison was a university student, I replied no. He also asked where our mum and dad were, and at that point I knew it was bad.

Tell him we love him

“I handed my phone over to the A&E consultant and he told my mum and dad that they needed to come home. Our parents were fortunately already on the road as they were on their way to Annecy. But this was 800 miles from home.

“We were then told that Harrison was going into the Intensive Care Unit. As I walked through the double doors of A&E, it was all a bit of a blur. I do, however, remember the mass of doctors and nurses that were working on him, guided by the senior consultant. If I had not been off work at a funeral, I would not have found him until later in the day. The doctors said he would have been brain dead or dead.

“My dad drove for 19 hours and 780 miles including a ferry crossing to get back to Derby. All Mum kept saying on the phone to all the family was, "Tell him we're on our way, tell him we're coming, tell him we love him". During the whole of this time, I stayed near to Harrison with family supporting me.

“In the meantime, Harrison was in isolation due to possible contagion, hooked up to all sorts of machines. One of the frightening things is that his rash had got worse. The right-hand side of his face was covered with this dark purple blotchy rash.

“It was a sleepless night for everyone. Around 11pm on Friday evening, we were told by a consultant that Harrison had had a septic shower and his organs were going into shutdown.

“Mum and Dad arrived on Saturday morning around 10am and were told about all the machines that were helping him, but I don't think anything can ever prepare you to see your child in the way Harrison was. I have never seen my mum and dad in so much pain before. It's nothing a family should ever have to go through. 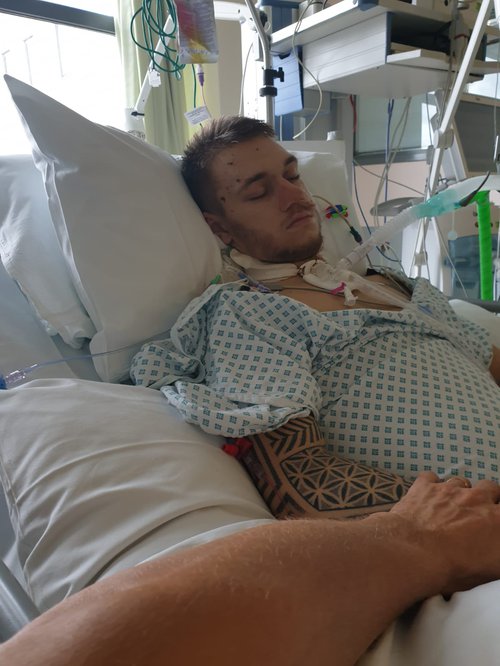 “We were all then told to go into a private room, along with one of the ICU consultants and an ICU nurse who had been looking after Harrison overnight. There was at least ten family members round the table and that's when we had a conversation that will remain in my mind forever.

“Harrison is a healthy young man, but his heart was described as a Tesco carrier bag blowing in the wind, he could not breathe on his own, his kidneys and liver weren't functioning and his bone marrow had stopped producing platelets, and we didn't know the extent of his brain function. The consultant then told Mum and Dad to get any family members in to say "hello" and to have no regrets.

“From then on, a four-week battle began. I have a document that has all the WhatsApp messages that my dad sent to all family members twice daily as an update for the entire duration of Harrison's time in Derby Royal. This includes all the medical aspects and how he slowly but surely fought for his life and how all his organs kicked back in one by one. 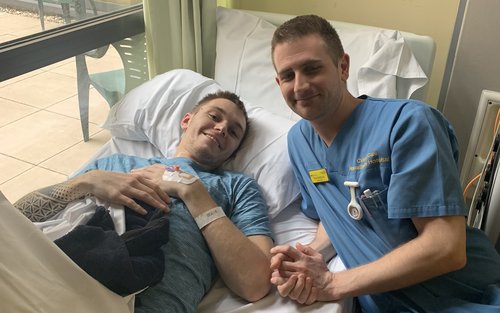 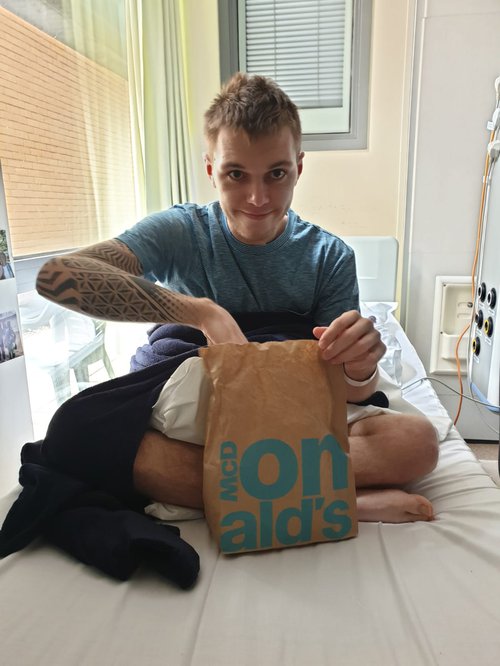 Wouldn't be with us today

“We owe so much to the Royal Derby Hospital ICU staff. We cannot praise them highly enough in their professional, committed approach and their dedication in helping Harrison make a full recovery. Without their amazing expertise and round-the-clock care, we know he wouldn't be with us today.

“I'm also aware that this is a rare ending to a meningitis story and I feel so grateful and lucky to still have my brother.

"Harrison made a full recovery with the exception of impaired hearing in his right ear, for which he now has a very discrete hearing aid. But we would take that result any day as we all know the outcome couldn't been so, so, so much worse." 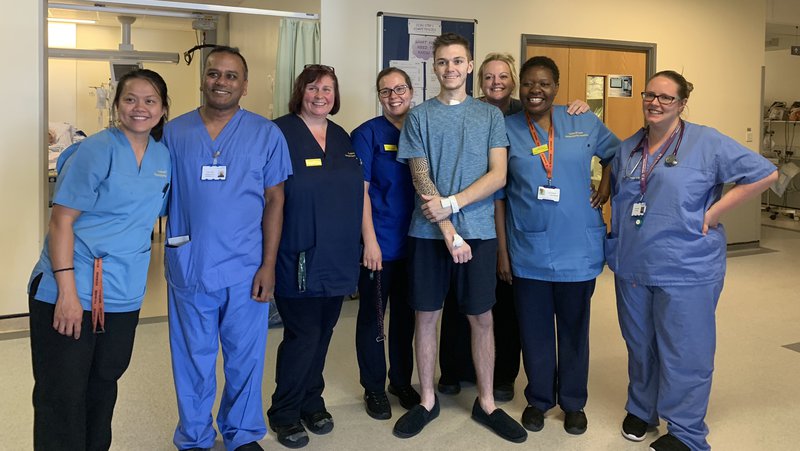 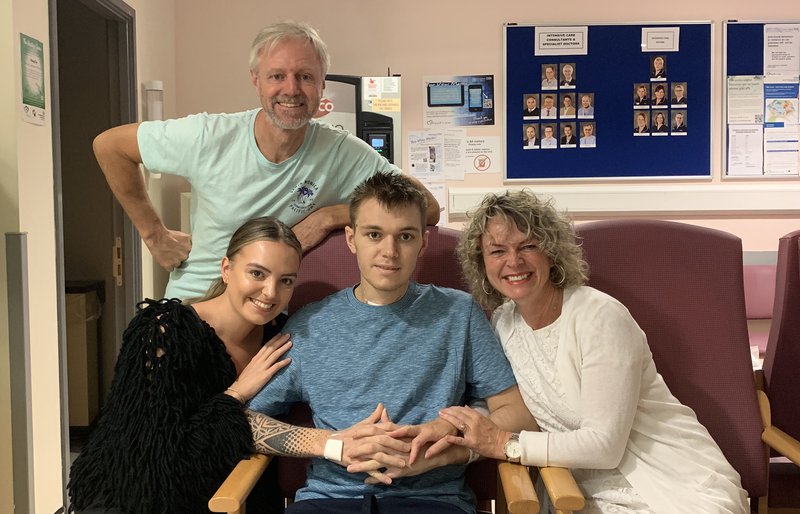