His mother, Hannah Whiteman, 24 of Bacup recalls her terrifying experience, not knowing if she would ever take her newborn baby home.

“I gave birth to Harrison on May 20th 2014. He was born with a lot of white spots on his body, which doctors believed were septic. They weren’t 100% sure what was wrong so, as precaution, they put him on IV antibiotics for a three day course.”

“Every day his condition was different. One day he would be responding brilliantly to the medication but the next day he had a high temperature, was sleepy and hard to wake, he became stiff and was being sick. His condition really did confuse the doctors."

We didn’t know what was wrong - I wanted answers

“I was so emotional that I hadn’t seen my other two children for over a week and as the days went on we still had no answers for what was wrong with Harrison.”

“On the Saturday at 10.45am I had a meeting with his consultant to see what Harrison’s next steps of care were and if they had any answers for me.”

“Harrison was being looked after by the midwives at the time but within 20 minutes, one midwife came running in and asked for the consultant. I sat waiting for them to come back.”

“The midwife came back with bad news.”

“Harrison was currently in resus as he had stopped breathing and they were going to transfer him down to NICU. It all happened very quickly.”

“When I saw my baby again he was in an incubator with wires everywhere and he wasn’t responding.”

“His consultant ran lots of tests, including a lumbar puncture, but I was advised not to be there when they did it as it’s not nice to watch.”

“According to all the nurses, Harrison didn’t make a sound which indicated that something was seriously wrong.”

Every day we were given more bad news

“Harrison was immediately treated for bacterial meningitis - the doctors didn’t waste any time waiting for test results to come back.”

“His condition worsened that evening and he had to be ventilated for two days. In total, he had four platelet transfusions, three blood transfusions and three lots of different antibiotics.”

“Every day we went in to see him we were given bad news after bad news. I thought we were never going to take our baby home.”

“Finally after two long weeks we saw some improvement. After three weeks we were eventually allowed to take our baby home.”

“Harrison has lost his hearing in his right ear and has six-monthly blood checks for his liver as it’s slightly enlarged.”

“He now is a thriving one-year-old and I couldn’t thank our lucky stars enough. I’d like to send my thanks to Meningitis Now for their support - I am hosting a charity fun day and raising awareness.” 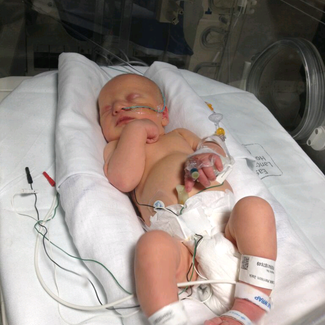 Meningitis can result in devastating after-effects, impacting on both those who have suffered and their families. Meningitis Now provides help and support to all those affected but we rely on your generosity to do so. Please donate now