When her seven-month-old daughter, Isla, came down with a high temperature and was refusing to feed she knew there was something wrong. Her fears increased as Isla started vomiting and would scream when she was touched. Lyndsey recollects the agonising hours when she didn’t know if her baby girl would make it through the night.

“On Wednesday 10th September 2014 my daughter Isla was a very active baby. She ate her breakfast and lunch, and was her usual self throughout the day."

“At around 7.30pm I noticed that Isla felt very hot so I took her temperature - it was 38.6 degrees. I gave her some Calpol in the hope this would help to bring her temperature down."

“When I attempted to give Isla her bottle before bed she was refusing it. This was so unlike her. I thought maybe it could be teething, so I kept her up for another 30 minutes before I took her temperature again. This time it was 39.4."

“I called NHS Direct straight way and they arranged for me to take Isla to the out-of-hours GP service at my local hospital, Queens Romford."

The next 48 hours were going to be rough

“When we arrived at the hospital the wait was two hrs long. Isla was sick twice and began to have convulsions. I called for a nurse and she was taken to children's A & E."

“Isla was assessed I was told she could have a sick bug. After two hours our GP was ready to see us."

“The GP told me that it was a viral infection and the next 48 hours were going to be rough. His exact words were 'she will get worse before she gets better, give her some Calpol and she will be fine'. He didn't take her temperature. I feel like he didn’t assess her properly."

“However this was the first time Isla had ever been poorly and, being a new mum, I took the GP’s advice and left the hospital at 1:00am."

Isla was a lot worse

“I put Isla to bed but when I put her in her cot her heart was beating really fast and she was still boiling hot. I led next to her and watched her breathe all night."

“At 7:00am in the morning Isla was limp and very sleepy but I managed to wake her. Isla had a dry nappy for around 15 hours."

“She was a lot of worse than the night before and even though the doctor said she was due to get worse, my mother’s instinct kicked in. I took her back to the hospital and I thank God that I did because five hours after admission, Isla was diagnosed with bacterial meningitis."

“I completely crumbled and kept questioning myself and the GP - why did he send her home?"

“Isla was so poorly; the doctors would not tell me if she would make it through the night."

“A couple of days later, Isla started to recover. She actually fought meningitis!!! She spent 11 days in hospital and is still undergoing regular check-ups as her development is slow."

“Isla is now 16-months-old however she is the size of a nine-month-old baby. I am blessed that my fighter beat this awful disease."

“My advice to all mothers is to trust your instincts. It saved my daughter’s life.” 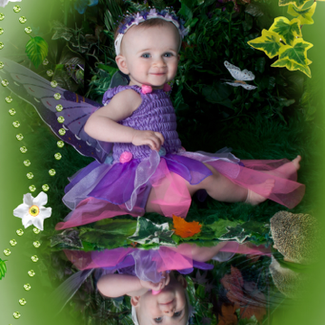