University student Matthew, from Stourport-on-Severn, told us his incredible story.

“I was admitted into hospital on 14 October 2019, which happened to be the day before my 21st birthday. Good timing!"

“Initially I felt ill the night before at work around 7:30. I had eaten a carvery at work and soon after I felt very cold. I was losing energy as the shift went on, so I had to ask my manager to finish my shift earlier. I continued to feel cold and shivery yet I was boiling to the touch."

“I started to feel dizzy and the lights in the kitchen were bright and I found them disorientating. It was then I asked my dad for a lift home, I couldn’t face the walk home. On the night I was sick. I assumed I could have the flu or at worst food poisoning."

“The next day I decided I was too ill to go to uni, so I stayed at home whilst my parents went to a family friend’s birthday meal. I told them I’d be okay and sleep it off. As the morning went on, I had an intense headache and my neck began to stiffen. I’d never really experienced a migraine before and the pain was unbearable. I then laid in bed with the covers up and blankets over me to keep warm and I got lots of wet flannels and put them on my head to try and relieve the pain."

“I started to feel sick and so I rushed to the toilet. I sat on the ledge of the bath and threw up in the sink. Now I’ve been sick before, from drinking too much on a night out (I am a lightweight!) or eating too much food, but I had never been sick like this before. It was frightening. I was throwing up so hard my ribs were hurting and it was a dark green bile and I was dehydrating."

“I remember our puppy Phoebe came into the bathroom and she just looked at me and the sounds of me violently being sick startled her. It’s like she wanted to help. Something wasn’t right. I tried taking some of my mum’s morphine medicine - anything in the hope the pain would subside - but it didn’t work. My parents decided to come back early from the meal, to check on me. It was then that my dad found me collapsed on the floor in our hallway, limp and unresponsive. My eyes were completely glazed over. Bulging wide open."

“My dad, being a nurse, was quick-thinking and called 999 immediately and the paramedics arrived to take me to Worcester Royal Hospital. I was very agitated, so much they strapped me to the stretcher so they could sedate me in the ambulance to keep me calm."

“I was taken to the intensive care unit for a lumbar puncture procedure, which is where they draw fluid from the spine to make a diagnosis. This showed that I had bacterial meningitis. Meningitis usually comes in three main forms; fungal, viral and bacterial - the last being the most deadliest." 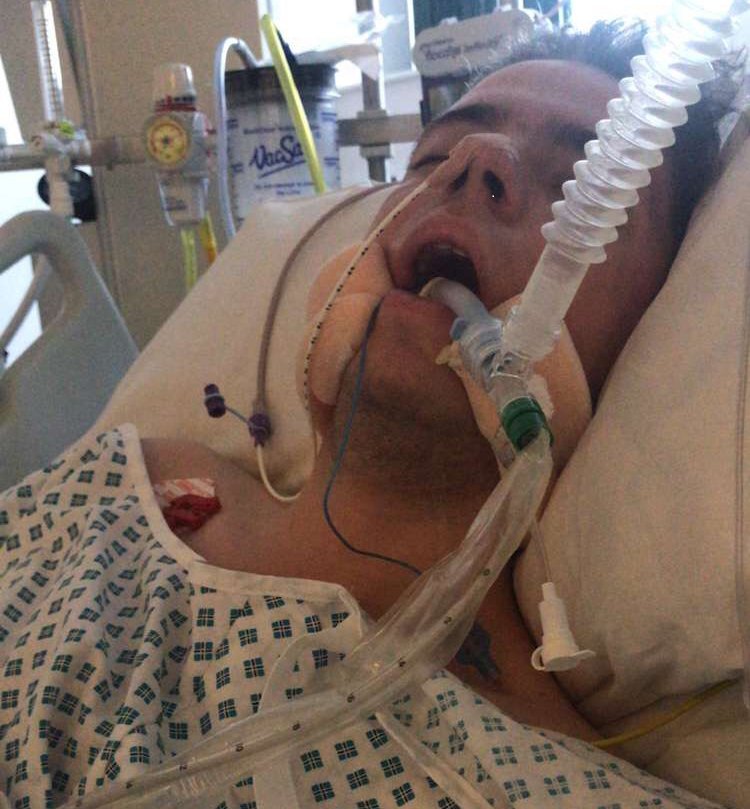 “They then started me off giving me intravenous antibiotics. I was also put on a life support machine to do my breathing for me as at that point I didn’t have the strength. I woke up on the Friday and it was the most bizarre feeling: I was in a hospital bed with a couple of nurses at the end of the bed looking at me whilst filling in forms. I thought I was having a very vivid dream or some sort of hallucination! I’d close my eyes and wake up at home."

“I didn’t, and the lead consultant came up to me and greeted me: "Hello Matthew, how are you feeling? You’re at the Worcester Royal Hospital in the intensive care unit, you’ve been very ill, you’ve had meningitis, we’re going to look after you and you’re getting better." That’s all I can remember. That’s when the reality settled in. I was very poorly and no matter how much I wanted to, I was not going anywhere. Despite some efforts to get out of the bed. It was then I looked up at the clock to see the time and the date - 18 October, three days after my 21st birthday."

“The hospital phoned home because my parents asked if the doctors could keep them updated of any changes in my condition. I had managed to get out of bed because I wanted to use the toilet. My dad shed a few tears because he was so happy that I could walk and he said to my mum, "Matthew’s walking!""

“My family came to visit me and they had to wear aprons and masks and take antibiotics because at that point the infection was still in my mucus, and one cough or sneeze could easily pass it on. My family and my girlfriend Xiola were very supportive, visiting me practically every day. My friend Dylan came to visit me from uni - we would chat and play card games on the ward. We were meant to be going on holiday in late November to New York and it was my brother that informed me that my parents had cancelled it because they didn’t think I was well enough. Everything seemed to be going wrong. But looking back it was just a holiday. I’m glad I’m still here and can be with my family."

“I was then moved to another ward - a respiratory high care ward with three other patients. One of them was a man only 10 years older than myself. He had been playing football and collapsed on the pitch with pneumonia and he had seen me arrive in the intensive care unit. I would nod to him and we’d ask each other how we were doing - these friendly exchanges kept me smiling. His mum would chat to my parents and was always kind to me and even bought me a big bag of Celebrations to take home! It’s amazing how you can get attached to people in hospital."

“I remember reading up about my illness one of the days and watching some videos on Facebook. I was very concerned about the after-effects and whether I’d be left with any long-lasting damage. Sometimes I would wake up in the night in my hospital bed with bad dreams and feeling sick. My temperature would drop and spike. Fortunately, the headaches are not as frequent and I’m going for a sight and hearing test soon for a check-up."

“I remember saying to my parents during one visit that I needed to use the toilet but it was a fib. I just needed to get away for a few minutes. I just cried and cried. It was an emotional afternoon and I was also thinking about what I’d been missing at uni, all the work and whether I’d fail. It’s okay to cry though and to have days where you feel emotional. After all meningitis is a very serious illness. We hear a lot about cancer and cancer support but conditions like meningitis - we don’t hear so much about, so it can be very daunting for people fighting it and trying to return to their normal day-to-day life."

“Recovery won’t happen in one day. It takes time and you need to pace yourself. I think for me coming home was hard because I’d had all these doctors and nurses taking care of me and being so nice and reassuring - and suddenly I was at home, isolated from friends at uni. All I could do was rest when I wanted to get back to how life was before. The best advice I could give is to take things slowly, which is not necessarily something you want to hear if you led a very active life before. Don’t try and do too much because you’re going to feel fatigued for some considerable amount of time. So think what you’re going to do in the day, maybe you want to finish that book you’ve been meaning to read or start a new series. You don’t have to cram loads in, just listen to your body and what it needs."

“One of the nurses was so nice, he reassured me that I could email the uni and ask them to send me work and they would understand my situation. Being ill actually made me think about whether I was happy on the course and after nearly losing my life I thought to myself, do you know what? It doesn’t matter if you don’t want to do it anymore, you can change it or go to a different uni and do something totally different entirely. The time that you spend at home getting stronger is not wasted. It gives you time to re-evaluate your life, what really matters, what do you want to do."

"Meningitis is a terrible disease but having had it I don’t think I would undo it if I could, because it’s made me prioritise family time more. I try not to worry about things too because the things we worry about often don’t happen at all. I cannot thank the NHS staff enough for the care they gave me. They made sure I was comfortable and I always felt safe. I’m just very lucky that I didn’t lose any limbs like some people do."