“My beautiful daughter Rubie contracted bacterial meningitis in May this year just days before she passed away on Friday 22 May. She was very quiet and slow in feeding on Wednesday 20 May, but was still okay in herself. We took her to the doctors at 9:30am the next morning and they diagnosed that she was suffering from a cold. She spent the day sitting quietly in her car seat as we were advised to keep her upright by the doctors. Her feeding was very slow and in a much smaller quantity. At 8:00pm she had her last feed as usual and we all went to bed shortly afterwards.

“Strangely, neither Rubie, my wife nor I woke up during the night until 4:10am. It was usually 12-12.30am and 3:00am. When we awoke we found her breathing very slowly. I proceeded to give her mouth-to-mouth whilst my wife called 999.

Meningitis is a brutal disease that can affect anyone at any time. It strikes fast and can kill within hours. If you have been affected by meningitis or meningococcal septicaemia, Meningitis Now can support you and those closest to you.

To make a donation to Meningitis Now in memory of Rubie, visit justgiving.com/RubieJane 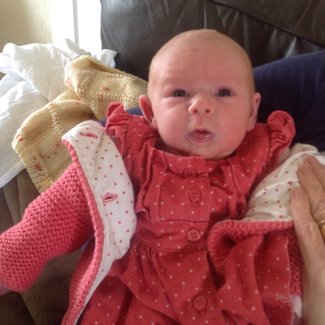 Please support us in any way you can