Sadie had contracted pneumococcal meningitis but thankfully went on to make a good recovery, since then Laura and John, from Bristol, and their families have supported our wider work. Laura tells their story here.

“In October 2018 our then 17-month-old daughter Sadie came down with a high temperature and an ear infection. Sadie and her twin sister Poppy had started nursery the month before and had picked up a lot of bugs, so we weren’t too concerned. When her temperature didn’t come down the next day we took her to the GP, who diagnosed her with an ear infection and prescribed her antibiotics. That evening she became more unwell, refusing food and was still very hot."

“The next morning she started vomiting and was very shaky and pale, and she couldn’t keep her antibiotics down, so we took her back to the GP. We waited almost three hours in the GP surgery and during this time Sadie was sick three times. We knew something was clearly wrong. The GP listened to Sadie’s breathing and checked her oxygen saturation – the reading was dangerously low, so an ambulance was called to take her to A&E."

“Whilst on oxygen Sadie seemed to improve, so we thought she must have a bad chest infection. Sadie was quickly seen in A&E and given a chest x-ray, which confirmed a viral chest infection. A blood sample was taken to check for septicaemia, but the results took a little while to come back. Whilst we waited, Sadie’s temperature stayed high, she kept being sick and she was still very lethargic, so she was admitted onto a ward."

“Overnight and the next day Sadie became more and more lethargic and her temperature wouldn’t come below 38 degrees. Her hands and feet were cold and her arms and legs were very blotchy. She was starting to stare vacantly into space, and was very confused, with a high-pitched moaning cry."

“The doctors and nurses kept checking for a rash each time they saw her but she didn’t have any, and they were convinced it was a nasty virus. Meanwhile Sadie’s blood test had come back positive for bacteria in the blood – the doctors weren’t sure it was a true positive result at that point, but just in case started her on an antibiotic drip."

“Around 5pm that day our wonderful nurse called the doctors to review Sadie again. Sadie was now sleeping most of the time and starting to cover her eyes from the light when awake. The doctors took her away for a lumbar puncture and we suddenly realised how serious it was."

Braced ourselves for the worst

“Having been told it was most likely a virus causing Sadie’s symptoms, we braced ourselves for what we thought was the worst case scenario – viral meningitis – so we looked on the Meningitis Now website to understand more about viral meningitis in case the lumbar puncture came back positive. Comforted by the knowledge that viral meningitis, whilst serious, is not fatal, Sadie’s dad went home to put Sadie’s twin sister to bed and I stayed in hospital with Sadie."

“A few hours later in the middle of the night the diagnosis finally came. Sadie had bacterial meningitis, later confirmed to be pneumococcal meningitis. This was a huge shock and so hard to comprehend. We’d seen the meningitis awareness posters before, but still never thought it would happen to our family. We knew it was incredibly serious and that the next few days would be critical. Sadie was mostly unconscious by this stage, and on a drip to deliver antibiotics through a cannula in her hand."

Cry out in pain

“Over the next few days Sadie slept most of the time, only waking to cry out in pain when she was moved or had a procedure done. After her cannulas repeatedly blocked, she was fitted with a femoral line under general anaesthetic so that there would be a reliable line to deliver her antibiotics. We had no idea at this point whether she would make any kind of recovery."

“Over the next two weeks Sadie had a daily dose of antibiotics, three days of steroids to prevent hearing loss, three CT scans of her brain, one MRI of her brain under general anaesthetic, two further cannulas and countless blood tests."

“Though Sadie continued to have bouts of sickness and high temperatures every day, she gradually began to be awake for longer periods of time. Finally, after about a week of antibiotics, she sat up and demanded a yoghurt – we couldn’t believe it! She was finally on the mend, though she still had a long way to go to get her strength back."

“After just over two weeks Sadie was discharged from hospital. She continued to have bouts of fever and vomiting at home, particularly if she’d overexerted herself, but otherwise started to get back to normal. Her twin sister Poppy was delighted to have her back home, having not been able to understand why Sadie had been away for so long (and her parents too)."

“Nine months on from leaving hospital, Sadie is a bouncy, happy 2-year-old and is back to her usual self. She is still having regular follow-ups from the hospital, but all signs point to her having made a full recovery. We feel so incredibly lucky to still have her with us and, while our experience was hell for us, we know it doesn’t even come close to what other families have experienced with this awful disease."

“It’s for this reason that we’re raising money for Meningitis Now. Sadie’s grandfather completed the 100 mile Prudential RideLondon-Surrey event and we are walking the 21-mile Five Valleys Walk in September. We’re also organising bake sales and coffee mornings to raise further funds, all to help Meningitis Now support other families affected by meningitis and raise awareness of the disease.” 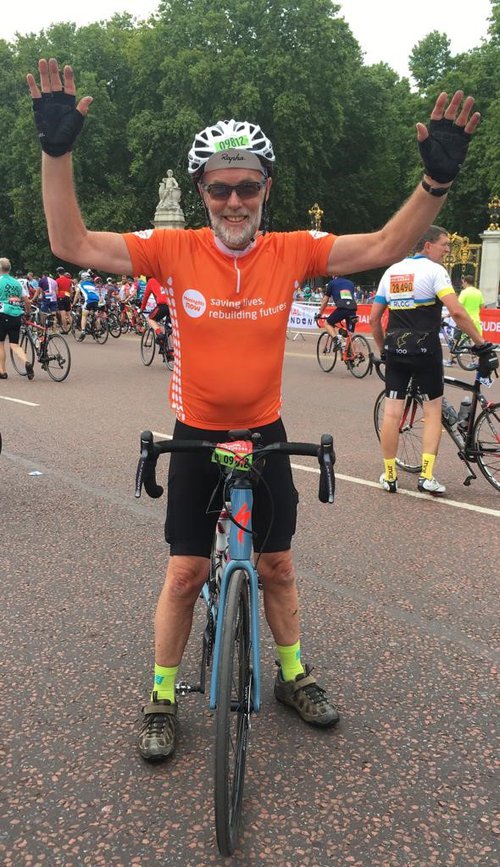