Initially no one was sure what was wrong but eventually it was diagnosed as the Y strain of meningococcal meningitis. Tammy pulled through but over six years later is still battling daily with the impact and after-effects of the disease.

“In December 2013 I was 32-years-old and working as a manager in a department store. I worked Christmas Eve and then went straight to my Mum's for what should have been four days. I didn't go home for six months. I started feeling unwell on the night of the 27th, but as it was Christmas – an exhausting time to work in retail – and I had been indulging in the festive spirit, I wasn't surprised to be feeling a bit ill. I had sickness and diarrhoea all of the following day, getting worse until I couldn't keep down sips of water.

“At around 10pm my legs started to feel very cold and go numb. Concerned, I went into my Mum's bedroom and when she saw me she knew something was very wrong. My skin was pale and mottled, my lips grey and the whites of my eyes were yellow.

“I was taken to A&E in an ambulance and put in a side room away from other patients, as I had diarrhoea and vomiting. While waiting to be seen my limbs got colder and colder until it felt like my veins were full of freezing cold acid, my lips went completely numb and my I lost my eyesight. The staff in A&E had no idea what was wrong with me – they suspected all sorts of things from cramp to tropical diseases to being on drugs.

“I was put into a coma and taken to the Critical Care Unit. It took over a week to diagnose me with meningococcal septicaemia. My kidneys failed, I got pneumonia and the skin all over my body blistered as if I had been burnt. My sight did not return fully for two weeks.

Dying from the outside in

“Initially I only had a slight rash on my stomach, but this quickly spread and worsened. I had Disseminated Intravascular Coagulation (DIC), a condition in which blood clots form and block blood vessels. The affected areas started to turn black, beginning with my extremities and working inwards. I was dying from the outside in as my body tried to preserve my vital organs. During this period I was slipping in and out of consciousness and still unable to see, so I only have vague memories of the first week or so.

“The main reason it took so long to diagnose me was because I was not considered to be at risk of contracting meningitis. I got the Y strain of the illness, which is less common and therefore not necessarily tested for, even when doing a lumbar puncture for meningitis. If I, one of my family or a member of hospital staff had known more about the symptoms of sepsis and meningitis I could have been diagnosed and treated a lot sooner, and perhaps even made a full recovery.

“As it is I suffered life-changing injuries. The DIC had caused extensive damage to my blood vessels and the affected tissue became necrotic. Large areas of tissue and muscle on my lower legs had to be removed, along with my nose, lips and parts of my toes and feet. I suffered tendon and muscle damage, my hands curled up into fists and I had burn-like sores all over my body.

“I was kept alive by machines for weeks, moving from the CCU to a renal ward where I continued to have daily kidney dialysis and blood transfusions. When I was well enough to stop the dialysis I was moved to another hospital where they focussed on saving as much of the affected tissue as they could. From there I went to the burns unit in Broomfield Hospital, where they began debridement and reconstruction of the necrotic areas.

“I was in hospital for four months having operations and physiotherapy. For the first month or so at Broomfield I was totally dependent on other people. I couldn't get out of bed or use my hands at all. But with daily physio I learnt to walk and care for myself again.

“I couldn't have got through any of this without my family and friends. I had visitors every day that I was in hospital - my best friend sat and read the newspaper to me on New Year’s Eve and he and members of my family often slept by my bed on plastic chairs so I wouldn't be alone.

“I had my 33rd birthday in hospital. The birthday and get well cards filled an entire wall of my room at Broomfield. My colleagues raised thousands of pounds to pay for future dental work and mobility aids. The love and support just kept coming and I don't think I'd have worked so hard to get better without it.

“I left hospital on 22 April 2014 and went to stay with my (heavily pregnant) sister for a further two months, going back to hospital three times a week as an outpatient.

A long process of little steps

“I am still under Broomfield Hospital having reconstructive surgery on my face. It's a long process of lots of little steps, but what they have achieved so far is very impressive, considering the extent of the damage. My legs and feet were probably the worst affected, and I have problems with mobility due to pain and altered sensation. Some areas of my hands and feet are numb, some are super sensitive and the tendons in my hands have shrunk and hardened meaning I've lost a lot of dexterity. I have had to learn a new way to do almost everything, but have been very impressed by how adaptable we humans can be.

“One thing this whole experience has shown me is just how amazing we all are. The things that our bodies can handle and recover from, the way our minds can solve problems, how much we care for each other – all of these things helped me stay positive and to feel like I really would be okay, no matter what happened.

“I am self-conscious of the way I look. Most of my body is scarred or disfigured in some way, either from the illness or from being used as donor sites in the reconstruction process, but I also see my scars as a testament to how strong I am. It is very clear that I have gone through something horrendous, but I hope it is also clear that I have not been broken by it.

Still the same person inside

“I am still the same person inside and although it can be hard to be trapped in a body that doesn't look, feel or work like mine I know I am very fortunate to be here at all. It has taken time to accept that my life will be different, but with the right help I have managed to make it a good kind of different.

“Almost every aspect of my life was changed by meningitis. I can no longer work, I had to move house, I have problems with mobility and dexterity, I use mobility aids, I am in constant pain, I am disfigured and no longer able to be completely independent. I rely on my family for transport and my best friend works as my carer, helping me do things I cannot manage alone.

“That is why organisations such as Meningitis Now are so valuable. I wish I had known about them when I first came home from hospital and I am therefore determined to raise awareness of the illness and the support available to those affected by it.

“Now I want to make sure nobody has to go through something like this on their own.”

We are very pleased to announce that Tammy will be taking part in the 2.6 Challenge for Meningitis Now, support her below 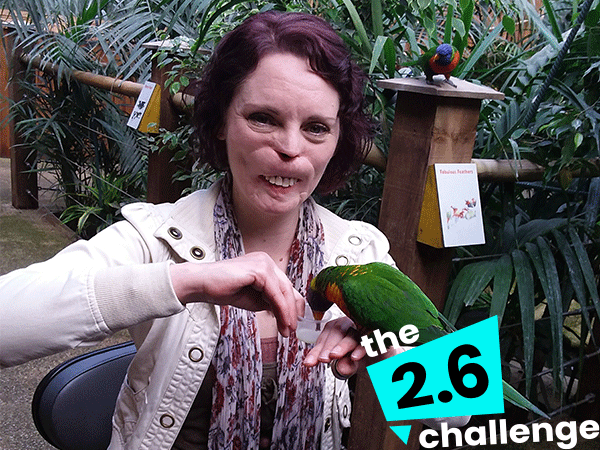