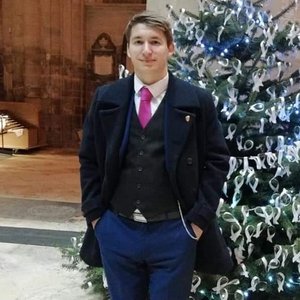 In my role as a Young Ambassador I can now further my work into helping others.

Due to the lack of knowledge in the medical profession at the time, Dominic was incorrectly diagnosed with tonsillitis and was dismissed home. He was then rushed to hospital later that same day and put on life support, which was switched off two days later after he was pronounced brain dead. Dominic had meningococcal septicaemia.

In 2010, after being inspired by my first charity event with school in aid of the World Wildlife Fund, I was compelled to help others further. With Dominic being a huge part of my life, I took to the internet and researched meningitis charities, which brought me to the Meningitis Trust, which is the former name of Meningitis Now.

Since then I have raised money and awareness about the charity and the disease so that I can feel connected to Dominic and hopefully make him proud, along with saving lives and improving the lives of those affected. In my role as a Young Ambassador I can now further my work into helping others.

I took on the Dartmoor Ten Tors Challenge in 2011, where I walked 35 miles across the boggy moorland whilst raising sponsor money for the charity. I have also organised and participated in many street collections whilst dressed as Monty the Duck, who was the ‘notorious’ mascot for the Meningitis Trust, to pull in more people to talk about their experiences and donate money.

I am now an Adult Instructor within the Dorset Army Cadet Force and while teaching young people aged 12 to 17 years I have been able to interest them into also helping the charity through fundraising.  I have written about these events in the local magazine with a circulation of 25,000 to help raise awareness and further spread the good work of the charity.